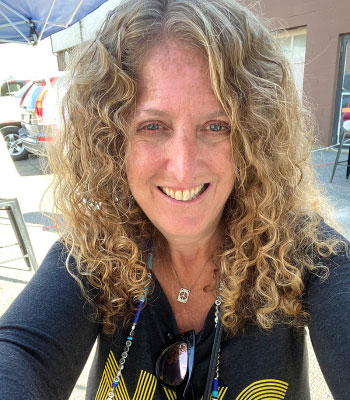 By the Fall of 1979, Ossining native Phyllis Koyner had been longing to see the Grateful Dead live for quite some time, but her high school friends were all outside of that circle…or so she thought.

One night, while working as a cashier at the A&P, she was surprised when friends arrived to inform her that she would be joining them in seeing the Dead at Madison Square Garden on September 6th. It was a gorgeous, warm day when Phyllis and her krewe arrived at MSG with an extra ticket in tow. In the midst of swarms of hippies with fingers in the air, she made eye contact with one lucky stranger, selling him the ticket for a whopping $15. The stranger immediately gave her a massive hug right there on the street, and she knew she was home.

Phyllis had seen live concerts before, but somehow, she always knew that this was the one she needed. These were her people. This was her tribe. Everyone in the crowd was coming together, excited, happy, and overflowing with energy. The Grateful Dead community felt like a family with everyone being in on the same secret. These fans– these deadheads were different from other concertgoers. They were just happier. Plenty of things were passed around in that show…including flowers! “Where else does that happen?!” she wondered. It was also a strange concert because the house lights remained on for most of the first set. Supposedly, Jerry Garcia had received a death threat that evening, but undeterred, the first number he sang was “Dire Wolf” with its refrain, “Don’t murder me…” The night ended with a walk to Grand Central Station, where she and her friends promptly missed their train by mere seconds. They had a full hour to wait, so they bounced back out into the streets for pizza and beer, just making it back in time to catch that final train to Ossining, putting a cap on the first of nearly 300 Dead shows for Phyllis.

These days, she’s sure to see an average of one-to-two musical events per week, but don’t ask her to pick a favorite band. If she could move Heaven and Earth, she’d get Led Zeppelin to reunite this year, but more realistically, she’d love to see Cimafunk for the first time. Aside from concerts, she also loves partaking in all of the different arts and culture opportunities her hometown of New York City offers. To Phyllis, New York City is a place where anything goes and everyone is accepted, as you’re “free to just be.”

When she’s not selling market research and competitive intelligence for the legal industry, Phyllis can be found engaging in volunteer work centered on hunger and food insecurity issues.

The NYC-Freaks community has meant so much to her and changed her life in so many ways, so volunteering for FAN is Phyllis’ love-letter to that community, allowing her to combine two things she truly loves: volunteering and live music.